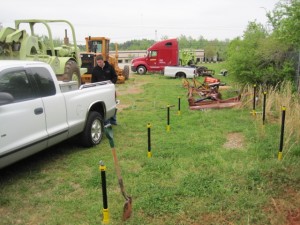 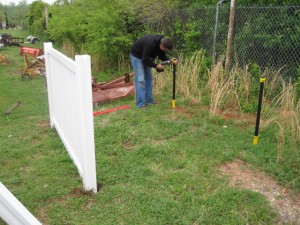 Steve doesn't know he's about to encounter a bit of a snag...

We take our new treasures to the WamBam sandbox, which is actually just a piece of land down the street that we have rented from John, an 80 year-old businessman. We haggled with John to let us use a sliver of his land for grass roots quality control.

After one particularly successful blow, he remarks, “That’s easier. I must have just gotten past a rock.”

And within seconds we’re standing in a rapidly growing puddle. And it’s only getting bigger.

We’re really hoping that he hit an oil well, Beverly Hillbillies style. Visions of instant retirement with a lifetime of luxury without all the hard work of an endeavor like WamBam start flashing through my head. But then we realize with dismay that it’s water.

Yup, Steve broke a water line. (For the record, he did call the locates prior to driving the anchors and was given the clear.)

Water is gushing everywhere and we have to find John to confess our misdeeds. Things need to happen to rectify the situation: Turn off the water to the property. Dig up the ground to get to the pipe. Call a plumber. Write him a check.

I will say that I am impressed with our fence system. Sure, the anchors require some muscle to go into the ground. But it was pretty cool to see in practice, and the posts looked as even and white as a used car salesman’s smile. Yup, maybe I’m biased, but our digless vinyl fence system is pretty cool, innovative, and fun to install. Just as long as the water lines are kept intact.

Hit a water line………better than a gas line, , , business as usual it sounds like…..trials and errors…..and near misses….and checks written!

Maybe We Should Have Called It "STURDY FREDDY"

Good News! We Have Stock!