What Happens When You Install Fence the Traditional Way

This cartoon illustrates why you really don’t want to install fence the traditional way.

Say Hi to Joe, the Inventor of Digless Fence

All those videos I referred to a couple weeks ago? We’ve decided to start leaking them.

Here’s the next one. It’s not the most polished video in our reservoir, but it’s an important one. It features Joe, whom we affectionately call Clever Joe, and talks about how he came up with the idea behind digless vinyl fence. We have no real affiliation with Joe other than licensing his patents and a lot of camaraderie. 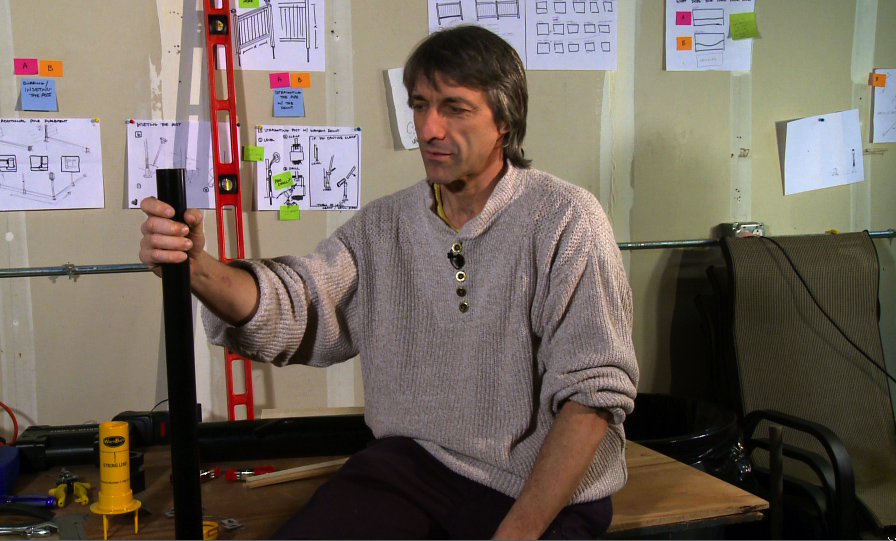 Joe is the mastermind behind the digless fence concept

Every once in a while someone comes up with a revolutionary idea that really changes things. Usually these ideas are so radical that they are met with resistance at first. After all, it takes time to start a movement.

Meet Joe. He is an idea man, an inventor- the sort of wild-haired guy who does crazy things. He’s cycled across North America, resided in Cuba off and on for years (no, he’s not a communist!), written a book and invented a solar-powered oven utilized in third world countries where power is scarce.

Joe is a hard working guy who loves to putter. A professional fencer by trade, a dozen or so years ago he was having a few issues installing vinyl fence. One, it took too long and was too messy. Two, the cold in  Manitoba Canada was so intense that even if the posts were put in cement footings 3-4 feet into the ground,  the frost would often heave them out of the ground.

So Joe put on his inventor hat and started to tinker.

First he started experimenting with driving pipe into the ground. It worked quite well, but there was a critical problem with this: it was virtually impossible to get every pipe perfectly straight into the ground, which resulted in slightly crooked fence posts.

Joe went to the drawing board and came up with a couple of simple devices that would compensate for the slightly crooked posts. What Joe came up with was not complicated or outrageous. It actually was really simple. But it worked, and worked well. In short, he invented a simple adjustable post collar to sleeve over the pipe so the fence would be easy to make straight and level.

Within a short amount of time, Joe was installing fence a new way. To old fencing friends who had invested in expensive equipment and were accustomed to installing fence the traditional way, this new concept seemed absurd. But when Joe’s fences went up much faster than theirs and performed just as well, his competitors eventually had to embrace the concept to keep competitive. Plus his reputation soon grew so that this new system was used to replace heaving fence posts that were concreted in the ground.

It’s now been 12 years and there’s a growing movement across Western Canada. Most professional fence companies are installing fence this way. We think it’s such a cool idea that we want to help spread the word.

Sure, it’s only fencing. It’s not going to solve world hunger problems or help mankind live on Mars. But time is important to everyone, and this idea is so clever that it will save homeowners a lot of time and hassle. In short, we’ve been lucky enough to stumble on a movement and we want to spread the good news. We want to change the world of do-it yourself vinyl fence.

Despite the lag on the website, we’re not sunbathing in the North Carolina sunshine. We are actually working hard behind the scenes on a lot of product development, marketing, and sales. Above is a technical demo of how our digless vinyl fence works.

If you’re a youtuber, check out the original video and give us a good rating: http://www.youtube.com/watch?v=RSLk6W7u2LY

And by the way, we have 5 other highly entertaining videos that we’re ready to launch, but you’re just going to have to be patient.