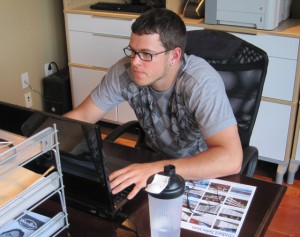 Ben is an asset to our team

Say hi to Ben, a member of our WamBam team.

You might think that you need to be slightly crazy to work at WamBam Fence, but Ben is pretty normal and easy-going. I think it’s the easy-going part that makes him jive here. For instance, Steve’s 4 year daughter was in the office the other day. She walks up to Ben and shamelessly stares at him. Ben is a polite guy and doesn’t say anything. Finally I ask, “Kate, why are you staring at Ben?”

She gets all shy and responds, “Because I liiiiike him.”

Fortunately Ben doesn’t have to be a heartbreaker because a few minutes later she informs us that she won’t marry him because she’s too young to get married.

Anyway, Ben primarily works on our product development. He essentially takes ideas and transfers them to technical drawings and specs, mainly for our ornamental aluminum fence program. He’s also bailed me out of more than one jam with some great product renders. He’s a busy guy, because not only does he work 20-30 hours a week at WamBam Fence, but he’s also studying Engineering as a full time student at the University of Charlotte.

Ben is a man of few words. Steve will try to pull conversation out of him, and it works best when he asks questions about NASCAR or politics. Ben works out and every so often Steve asks him in jest to flex his biceps. He politely declines with a grin.

“Ben, do you have anything you would like to say on our blog?” I ask him.

He smiles and shakes his head.

We’re thankful for Ben and the work he does here. He’s an asset to our team. With his help we’re creating a do-it-yourself vinyl fence system that doesn’t require digging holes or pouring concrete. It’s fence that’s easy to install. 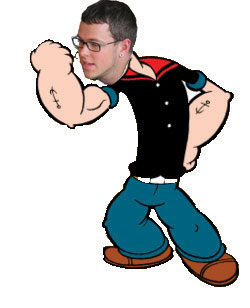 He may have turned down Steve's request to flex for the camera, but he's got a good sense of humor.